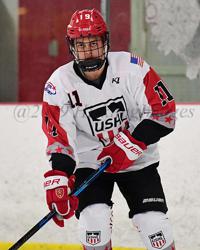 Former California Bears ‘03 Forward, JT Halliday, was selected in the 13th round of the USHL draft on June 6th by the Cedar Rapids RoughRiders. As a freshman, JT currently plays Varsity Hockey for St. Paul Prep School in New Hampshire. During his time with the Bears Hockey Club, JT lead 2 Bantam teams to California State Championships and 2 Nationals appearances.

Coach Peter Torsson on the type of player JT was for the Bears: “JT was a natural leader on the team. Whether he played on the top or bottom line, he always got the most out of his teammates. He would rise to the occasion in big games and carry the team on his back when needed. His skill and work ethic were always in high gear but what made him stand out the most was his curiosity about the game. He always wanted to challenge the purpose of everything, so he would rarely get stuck in the weeds on the ice but apply the higher probability decision constantly to always put himself in the best situation. This brought consistency to the game and whether we played a strong or weak opponent would not matter as his game was always ahead of his opponents.”

Coach Peter Torsson on JT being drafted: “JT being drafted was a great moment for him and his family who have supported his dreams for a long time. I am happy for him to get the acknowledgment he deserves, and I can see him doing very well for coach Carlson at Cedar Rapids in the future. Given the attention to his game by some respectable scouts on a national scale, the sky is the limit for JT so I feel this is just the beginning.”

Congratulations JT, the entire Bear family is extremely proud and happy for you and your family!