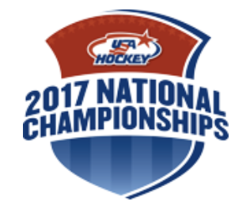 The Bears Bantam AA team is capping off a dream season with a trip to the USA Hockey 2017 National Championships in Coral Springs,  Florida  at the Florida Panthers Ice Den.

Coach Torsson's squad finished the regular season 18-1, with three tournament championships under their belts, then rolled through the CAHA playoffs undefeated earning the State Championship title.

Now the team faces  their biggest challenge of all as they venture east to test their abilities against the best teams in the country.  The Bears  first game will played Thursday, April 6th against the Toledo Cherokee and can be streamed on HockeyTV for a fee.