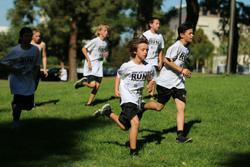 The Bears first annual FUN RUN fundraiser was an overwhelming success as players and parents raised over $13,000 to benefit both the Bears Hockey Club and City of Hope pediatric cancer treatment.

Event Chairman, Douglas Gunderson, left no stone unturned, from the rental of Johnny Carson Park in Burbank to the perfect weather he ordered, the event went off without a hitch.

Leading up to the run, players from all teams solicited family and friends to sponsor the Bears in this run for charity.  Kudos to Killian Mccarroll of the Squirt BB team and Aris Rachevsky of the PeeWee B team who were the Club’s top fundraisers!

Before the run began, Douglas Gunderson reminded the young Bears players that they weren’t just running for their Club, but to raise money for kids who aren’t lucky enough to play hockey and fight every day with a debilitating illness.   All involved in planning the event felt it was important for the kids to learn the value of being givers as well as takers.

Particiapants received a FUN RUN t-shirt and although the run was not billed as a race, the kids competitive juices got flowing as soon as they bolted from the starting line.

Following the run, players were treated to a picnic lunch served by parent volunteers.  Ayong Garcia showed his skills working the grill and Vilda Franz served enough hot dogs to feed an army.  Thanks to Costco for donating a gift card that helped offset the cost of food.

Other parents who volunteered their valuable time to make this event such a success were Jessica Arthur, Angie Papayoanou, Radhika Chaudhari, Michelle Thomasy and Mark Albrecht.  Also, thanks to team managers Kristen Orien, Margarita Red-Horse and Stacy Trejo for their organizational efforts.

Finally, a special thanks to Beth and Todd Peterson for their outstanding photography skills and patience!

The success of an event like this rests squarely on the shoulders of dedicated parents and the Bears Club is extremely lucky to have so many!