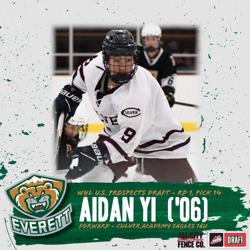 Aidan Yi (2006, Forward) was selected as #14 overall in the 2021 WHL Priority Draft. While a Bear, Aidan tallied 74 points in 59 games and was instrumental to the success of Coach Torsson’s Bantam AA team during the 2019-2020 season who were set for CAHA finals but lost to COVID-19 which ended the season pre-maturely.

Coach Torsson said “Aidan is a fantastic player who is so fun to watch. His grit and ingenuity are off the charts. As a smaller forward he has always had to find the path of least resistance and evade quickly to make plays but then he gets into a battle and his grit overpowers players twice his size. He reminds me of Yamamoto (Edmonton Oilers) and likewise to him I don’t see anything stopping Aidan from playing hockey for a long time. The only one who will decide that is Aidan himself.”

Aidan is currently with Culver Academy in Indiana where he plays on their 16U AAA team. We wish Aidan and his family the best in the future and congrats on being drafted.