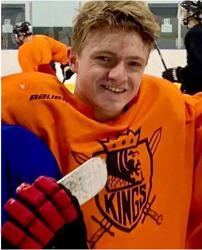 We all know in the hockey community that the game can end in an instant. We know as players and we know as parents. We also understand what the word family means. We in the hockey community, the hockey family share a love for the greatest sport in the world with our kids with our friends and with each other, looking out for one another like no other sport. The Bears organization has a strong connection with Prep School Hockey and that relationship continues to develop year after year. Our children go off. They move thousands of miles away as teens to pursue a dream for as long as they can and hopefully come back better for the experience. My son Madden is such a young man. Thanks to the Bears Madden has been able to continue playing hockey, receive an amazing educate and grow at Milton Academy just outside of Boston MA. Madden has made friends with young people from all over the world, but as usual no bond has been made like the bond he forges with his teammates on the ice. One of these young men’s
name is Jake Thibeault. Madden and Jake had played at Milton when Madden was a freshman at Milton, last year briefly as Covid would allow and were slated to start this year off playing for the same split season team before once again lacing them up for Milton . Except over the Labor Day Holiday, Jake went into the boards went down and did not get back up. Jake had injured two of his vertebrae and would need to be taken away in an ambulance. The next day at the hospital Jake was told that he might never
walk again. But Jake said there was no way that he wasn’t going to walk again and anybody who knows Jake, believed him. Jake’s family is like all of us, driving to the rink every morning, dressed their kid till he was old enough to do it himself, stayed in endless hotels and ate a thousand slices of pizza and subs and Tupperware containers full of orange slices. Jake’s family is all of us and Jake’s family needs our help.

The hockey community has been amazing and really pulled together for Jake from local clubs to the NHL but there is more to do. So I ask you to click the link below , catch up on Jake’s progress from time to time donate what you can and give Jake and his family a couple words of encouragement while you’re there.