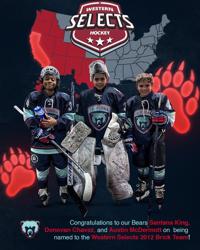 What is the Brick Tournament?

Traditionally it is THE tournament for some of the best U10 players in North America.

The Brick Invitational is a week-long tournament for U10 division hockey players that takes place at the West Edmonton Mall in Alberta, and runs between the last week of June and first week of July every summer.

“If you’ve never seen it, it is so much fun to watch,” said Andy Wigston, executive director of the Brick Invitational Hockey Tournament.

The tournament began in 1990 when Bill Comrie, founder of the Brick Furniture store, was discussing with Wigston and other executives the fact there were a bunch of great tournaments for young hockey players — like the Quebec International Pee-Wee tournament — but there was nothing specifically for 10-year-olds.

Comrie’s son Mike, who would go on to play 11 seasons in the NHL, was just a talented, 10-year-old kid in 1990 without a meaningful tournament at his age division. Bill wanted to change that.

Having opened a Brick store in the West Edmonton Mall, Comrie and company knew there was a rink already in place.

In its inaugural year the tournament lasted only three days and consisted of eight teams. Thirty years later, the tournament is now capped at 14 teams. Part of “spring” hockey,  teams come from six different Canadian provinces and seven American states, including one team made up of kids from all across the western part of the United States. They are NOT traditional “winter” hockey teams, but rather elite teams built from players across various “winter” teams and leagues.