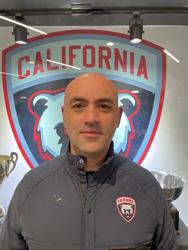 A Southern California native, Andy Gevorkyan started his hockey career with the Golden Bears organization at five years old.  For the next twenty years of his hockey life, Andy rose to elite ranks playing AAA hockey for the Jr. Kings, A hockey for the Helena Bighorns and Santa Fe Road Runners of the North American Hockey League (NAHL), and finally Division One hockey for American International College (Atlantic Hockey Division).  Andy has experienced great success in developing young players and in 2018 lead his 12U AA team to a CAHA State Championship.  He brings extensive experience and perspective having played at various levels and excels at passing his knowledge on to his aspiring players.