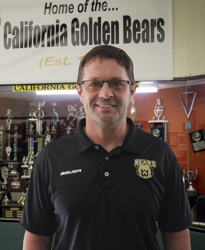 Mark Halliday grew up in Minnesota where he took to the ice at age 6 when his parents gave him a pair of skates for Christmas.  After spending three years developing his skills on local outdoor rinks, Mark began his youth hockey career at age 10, playing in the Squirt A division.

In high school Mark was a three-sport athlete, lettering in Hockey, Football and Track.

His first two years of college, Mark attended The University of Minnesota, Crookston where he played football and was named team Co-Captain and Student Athlete of the Year.  While at U of M Crookston, Mark also found the time to coach Pee Wee and Bantam hockey at a local club.  After transferring to St. Cloud St., he continued building his resume behind the bench, coaching for a local high school hockey team and a junior high football team.

Mark spent over 20 years in military.  During his service he was deployed on several occasions, the last time being to Iraq-Kuwait in 2007-2008.  He reached the rank of Captain before retiring 8 years ago when he decided that his family needed him more than the military.

Among his many other skills, Mark has been a commercial/instrument rated fixed wing pilot since age 21.

He currently works as a K-5 Special Ed. Resource Specialist Teacher and has been coaching youth hockey for the past seven years at all levels from Mini-Mites to Bantams.