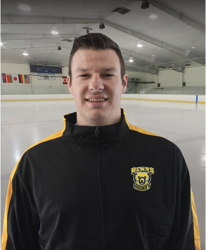 Trevor was born and raised in Burbank, CA and played youth hockey with the Golden Bears through Peewee. After excelling with the Bears and other local youth clubs, he set off for a Junior Hockey Career that led him all over the US and Canada, in the USHL, NAHL, AJHL and the AWHL. During that time, he served as a team captain on a National Championship team and back to back League Championships. After Juniors, Trevor elected to return home and attend Loyola Marymount University where he earned his Degree and played club hockey, serving as Club Vice President and Team Captain.  In his senior season, Trevor led the country in points at the club level.

Trevor has been coaching youth hockey since  high school, where he served as a student coach with the Golden Bears. During college he coached skills/skating lessons in his spare time as well as in-house programs and hockey camps over the summers. Since earning his degree from LMU in 2016, Trevor has been working in digital marketing and coaching with the Bears. His vast playing experience and knowledge of the game, at all levels, helps him develop his players to the best of their ability.